Meet MONA if you dare – will you love her or not?

> Tasmania, Australia > Hobart > Meet MONA if you dare – will you love her or not?

We mentioned to a few different friends that we were going to Hobart. To my surprise, each immediate reply was are you going to MONA?

“Probably,” I replied to the first friend, NV, not that I knew anything about MONA. Rather, the way in which she’d asked the question had pulled that response out of me: NV was wide-eyed and her voice was low, yet abrupt, which conveyed to me that MONA was a strange spectacle and a case of Enter at Own Risk.

I wasn’t sure whether I was bound to love MONA or not. Was MONA an on an island? Was she an island? Or a dystopian town nestled in a Tasmanian valley, covered in fairy lights?

N.B.: Bold green words are links (but not this sentence 😉 )

I held back the questions, feeling like I should’ve already known about MONA. By the third friend, my reply was a strong yes although I hadn’t even gotten around to searching MONA yet.

We made our first enquiry about booking the MR-1, Mona Roma Ferry, to MONA and back at the Brooke St Pier Hobart ticket service desk. By this stage I knew that MONA was a Museum of Old and New Art, but the enigmatic mystery of MONA was still all pervading:


⇒TIP: ASK YOUR HOBART HOTEL RECEPTION WHICH TICKETS FOR TOURIST ATTRACTIONS AND EVENTS THEY CAN ARRANGE FOR YOU. JIM WAS ABLE TO PURCHASE TICKETS TO MONA AND THE MONA ROMA FERRY VIA THE MACQ 01 HOTEL RECEPTION, WHICH SAVED US HAVING TO GO BACK TO BROOKE ST PIER  TO PRE-BOOK. ASK ANY HOTEL IN THE WORLD WHAT BOOKINGS AND TICKET PURCHASES THEY CAN MAKE ON YOUR BEHALF FROM RECEPTION!

I got off the Mona Roma (MR-1) Ferry feeling that the “titillating” experience of having “Boobarella” aboard (see WHAT THE..?! on the Mona Ferry post) had been a precursor – a scene setter – for the enigma called MONA, the entrance of which lay up the 99 steps ahead. I was buzzing with anticipation, open and eager for the land of peculiarities waiting for us.

We entered MONA with the crowd…

The first thing that aroused my curiosity was that we were already on the top floor. Instead of looking up, we were peering down to the levels below. We were going underground, exploring MONA like miners.

“It would have been cheaper and easier to build upwards,” commented Jim. “Imagine the excavation cost alone.”

As we were soon to discover, no expense, effort, or daydream was spared crafting MONA; a generous and well-executed indulgence of the abstract imagination and of concrete creativity. It’s an eclectic hybrid museum art gallery full of ideas that send you off on tangents you don’t see coming.

Take what you typically think of when you think museum and then gallery, blend the two, flip the stereotypical presentation and decor, and liberally sprinkle with irreverence, intrigue, perplexity, and confrontation.

The second thing I found curious upon entry was the O Device. The staff member manning the Devices couldn’t show us how to download the MONA app onto our phones after our unsuccessful attempts. (OH!!!!) So, we took the O Devices and headphones that MONA provides.

The O Device broadens your experience by allowing you to view each display accompanied by commentaries, articles, music, and images and without any physical signage. It detects where you are and the artworks in your vicinity, so that when you move around, the art information at hand adapts and accompanies you.

I liked the effect of not having signs to visually detract from the aesthetics of the artwork and interior design, but the lanyard and device were a bit cumbersome when e.g. going to the loo, taking off my jacket etc. (OH!!!!)

Also, we found it difficult to read the small screen font. Consequently, we kept wrestling with putting on our reading glasses and removing them to see the artwork. There may have been some way to enlarge the device’s screen view, but we didn’t find it at our fingertips. (OH!!!!)

Besides, working out how to navigate through the O Device commentaries, articles etc. pre-occupied us. The articles, which were crazily pro or savagely (sometimes profanely) con the works (OH!!!!), were also a distraction.

We found that we couldn’t get into listening to the music that went with the displays and reading all the extracts about the artworks. The reason for this was that there just wasn’t enough time to stand still that long due to MONA’S size and plethora of contents. (OH!!!!) You would need more than a day trip to explore MONA this comprehensively.

The third thing that grabbed my attention was that you could take the circular glass lift down to the bowels of MONA or the stairs that spiralled down around it.

We didn’t discuss why neither of us wanted to take the glass elevator, but I was thinking that it reminded me of the Get Smart telephone box lift, crossed with the circular Cone of Silence. No-one would hear you screaming.

Or the glass elevator that shoots up through the roof in Willy Wonka and the Chocolate Factory.

Before you find out about some of the displays that we saw there, please note that:

MONA IS ALWAYS BRINGING IN NEW WORKS OF ART, EVENTS, AND EXPERIENCES TO SURPRISE, SHOCK, EXPAND, PUZZLE, AND INVOLVE YOU.  THEREFORE, MY FOLLOWING MONA PHOTOS, HIGH-LIKES, AND LOW-LIKES ARE INDICATIONS OF WHAT YOU MIGHT FIND, AS OPPOSED TO SPOILERS.

MONA IS ALWAYS EVOLVING AND YOU’LL NEVER KNOW WHAT YOU’LL FIND THERE.

It was interesting to watch how fast and how slow the lights pulsed with children and older people’s pulses respectively. A few times the lights seemed to go dead while trying to identify a person’s heartbeat. This caused a few oohs and oh-ohs, but then the lights gradually synchronised with their pulses.

It captivated me how altering the movie play speed sequences and jumping and cutting out film frames totally altered your perception of how the girl was feeling and how we perceived her experiences.

Often, the time moved in irregular sequences, producing mind-blowing effects and conveyed how the time speed in which we observe things affects the way we see them. For example, at one part the girl was putting on make-up in the mirror. However, the slow and irregular movie frame sequence warped her movements, turning the girl into a drug-affected has-been.

The film filled me with a strong mix of awe and unease, which was brilliant. This movie captivated me the most out of all the art displays.

The Fat Car and O Device

I loved the Manchego croquettes, with lemon emulsion and pickled chilIi ($5.50AUD each)  and Jim enjoyed the raw fish with pickled fennel, yogurt, and fermented cucumber ($24AUD).

Surprisingly, our waiter confirmed that my glass of sparkling wine, which travelled 45cm across our table by itself, was not part of MONA’S illusionary displays! To find out more about our unexplained, yet verified experience, visit our MONA Museum WHAT THE..?!

The huge rock face besides the bar that leads to Pharos is delightfully imposing and rustic. Corridor of sheer rock face so high so deep underground!

When I returned, Jim had no drinks.

“A Shit Factory. You don’t want to see it. You really don’t. Ohhhhh. It shows you the making of shit.”  Jim screwed up his face and held up his hands like he’d touched and smelled shit. “If you see it you’ll want to vomit.“

I was curious, but feeling a bit weird and overheated as it was. Seeing the creation of shit would probably tip me over, so I nodded.

For example, a stand-alone sculpture called Lincoln consisting of a pile of smallish wireless and juke box type objects with an Abraham Lincoln style hat on it.

I liked how it conveyed that the Honest Abe of today is made up of “truth” from the media, but the sculpture sat in a huge, bare walkway, looking cheap.

On second thoughts, that’s probably the message that MONA was emphasising by placing the piece there!

Another instance: in a very small room in The Museum of Everything posed four ostentatious, sassy, creepy girls on high shelves, giving them the over-attention they seemed to be seeking.

Perhaps that was the point! No doubt everything in MONA has a point if you take the time to ponder it.

At the end of our visit I lost Jim in there and panicked because the ferry was due to leave in 10 mins. I darted through the rooms and became disorientated because the doorways only lead to more rooms and no visible exit.

With heart thumping, I found an attendant who told me how to escape from The Museum of Everything.

I’m glad we met MONA and found out what all the mystery was about. And I believe that MONA is well worth taking the time to experience.

Most aspects of the place have the WOW! factor. For me, some of them have the WHY? factor, which invited me contemplate the deeper reason why these displays were chosen. This was probably the intent.

We arrived at about 12.30pm. By 1.30pm we realised there was much much more to Mona than we had expected and immediately re-booked our 3pm MR-1 Ferry return to Hobart for 5pm. Even then, we didn’t get to see everything by a long shot.

Five hours was not long enough for us to fully appreciate MONA, however, more than five hours at MONA would have been brain overload and too exhausting.

Basically, if MONA clicks with you, you’ll want to stay there for a good five hours. A quick look through 3 hrs. Extensive visit 6+ hours if you can handle it.

I recommend staying at MONA Pavilions to visit MONA over a two day period if viewing dynamic, thought-provoking old and new art and learning all about the works is your thing. 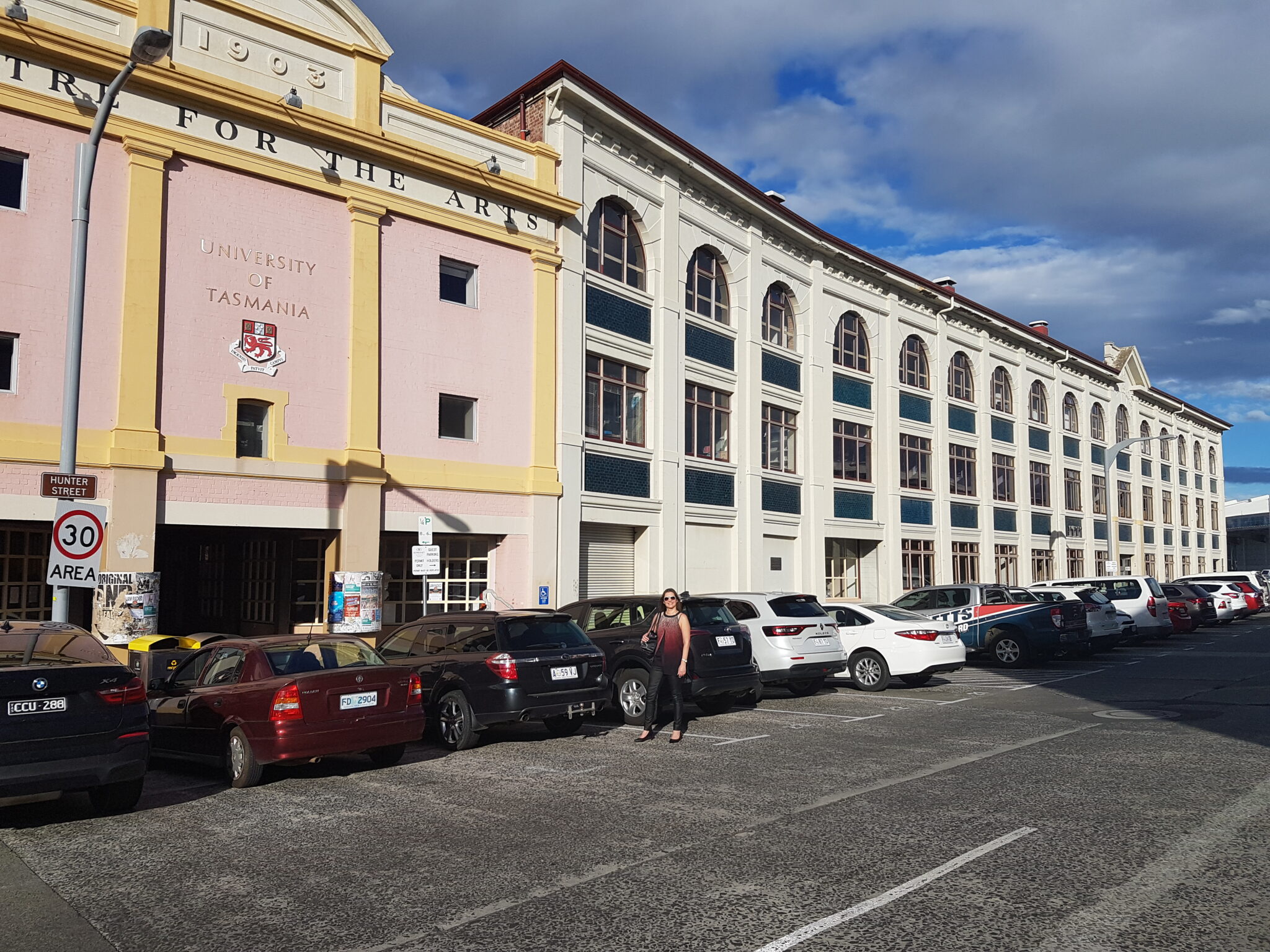 Besides Hobart being a short ferry or car ride from MONA, it also has an abundance of beautiful historical buildings to see. There I am in front of antique University of Tasmania Creative Arts building, which is next to the old IXL Jam Factory opposite the luxurious MACq 01 Hotel in Hunter St, Hobart. We loved staying there! (Hover =Zoom)

Speaking of the old IXL Jam Factory, does anyone remember the IXL Jam boys? You can find them on the wall of the IXL Long Bar at the Henry Jones Art Hotel (formerly the IXL Jam Factory). Take a close look at their faces. (Hover=Zoom) WHAT THE..?! Very risque for yesteryear! But founder Henry Jones was always ahead of his time!